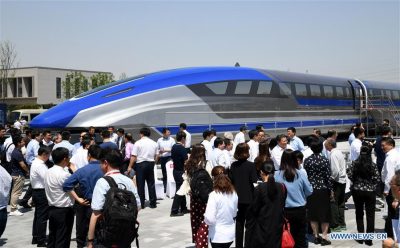 One of the great advantages of train travel compared to flying is the saving in wasted time. A flight in most any country normally involves a one-hour trip to the airport with a requirement to arrive at least 1.5 hours prior to departure. At the arrival end, there is always the seemingly long wait to deplane, the long walk to the baggage carousels or the exits, then the one hour or more trip downtown.
When we take into account the commute and the necessary pre-departure allowance for check-in and security clearance and the 2-Km walk to the departure gate, then the post-arrival delays and the commute downtown at our destination, trains are equal to flying in trips up to 1,200 or even 1,500 Kms, and much faster than flying for shorter trips. Not only much quicker, but less expensive than air travel. The frequency of departures, at least between major centers in China is astonishing, the Shanghai-Beijing route having some 75 or 80 HSR trains each way each day, often leaving only 10 minutes apart.
In China, the railway stations are downtown so the commute is minimal, one arriving at the station with luggage in hand only 20 or 30 minutes before departure. There is no ‘check-in’ process as with the airlines, only the usual security check and luggage scanners when entering the station where you can spend time in comfortable waiting rooms or simply find the correct platform and board your train. Even though many stations are huge, walking distances are normally much shorter than in most airports.


Another advantage of train travel is the considerable convenience and comfort, trains being much superior in both categories with an absence of pressure and time apprehension. Trains eliminate most unpleasant elements of air travel, with the attraction of being able to see the countryside; from a plane, we see nothing. On a plane, we are forced to adhere to a rigid schedule: the time for coffee or a meal, the time to close the window curtains and darken the cabin so the staff can rest. If the food cart is out, you cannot get up to walk around or go to the bathroom. Everything seems regulated and under pressure. Leaving your seat is often a major inconvenience. By contrast, on a train you are free to do as you please. Your luggage is accessible at any time, the food carts come by regularly, the dining car is always there, seats have twice the leg room, the aisles wide enough to accommodate passengers, everything much more relaxed, pleasant, and enjoyable. 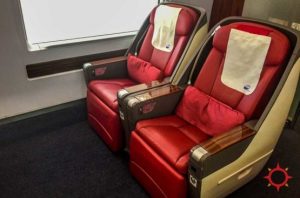 China’s high-speed trains are very quiet, without wind noise and mercifully free of the incessant hum of aircraft engines. On the latest generation of HSR with its flawlessly-welded rails, even the soft clacking of the rails is gone. The seats are as wide or wider than airline business class, they recline partially (recline fully in business class) and, with the comfort and silence, it is very easy to work or sleep on a train. At the destination, since that station is also downtown, taxis and subways are conveniently at hand.
Trains not dedicated to short runs have sleeper cars which are perfectly comfortable even in older trains, the later generations offering lovely duvets, a separate TV for each bunk, electrical outlets, lights, Wi-Fi. The sleeper cars offer a pleasant alternative to air travel for the typically rushed and pressurised one-day business trips, for example from Shanghai to Guangzhou, Shenzhen or Hong Kong. We board our train in the evening after dinner, do a bit of work or watch TV, and awake at 7:00 AM downtown at our destination, with enough time for breakfast before our first meeting. On the return trip, after a full unpressurised day, we have a leisurely dinner with friends, board the train and awake at 7:00 AM back in Shanghai. With two full nights’ sleep, there is no jet lag and no residual fatigue. 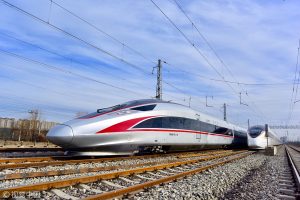 “The American failure to realise an HSR system is not because China has better leadership, vision, planning and execution and the wisdom to sacrifice short-term benefits and minority interests for the long term gain and the greater good; it’s because Americans have democracy and love freedom. The bickering and indecision, the squabbling, the vacillation and eventual paralysis of all levels of US government on this issue, an impossibility in any sane country, are actually a badge of merit in America, evidence of their virtuous freedom. So, let China build its high-speed trains. The more trains they have, the less free they become. The Americans would never be so foolish as to sacrifice freedom for good transportation or democracy for roads and bridges.”

I don’t know the author of this brief passage below, but I want to share the quote with you because he captured perfectly the American spirit.

“At the end of 2013, California was still hoping to build the nation’s first high-speed rail line, a 830 Kms track from Los Angeles to San Francisco, that would be scheduled for completion in 2029 (more than 16 years) and would cost about $70 billion not including the inevitable cost over-runs. By contrast, China built its 1,320 Kms Shanghai-Beijing HSR line in only three years at a cost of 200 billion Yuan – about $32 billion. So the US high-speed train – if it’s ever actually built – will be 60% slower than China’s, will take five times as long to build and cost almost five times as much for an equivalent distance. Of course, the Americans could just ask China to build their HSR in only 18 months at a cost of only $20 billion, but that would mean admitting Chinese superiority, and that means the US will never have high-speed rail.” 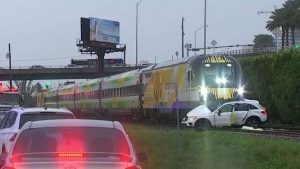 However, unknown to the world at large, America does indeed have a “high-speed train”, Richard Branson’s new ‘Brightline’, that runs 100 Kms from Miami to West Palm Beach in Florida. According to the promotions, these are “sleek, neon-yellow trains, which travel at speeds of up to 127 Kms/hr (!!!)”. To be fair to the Americans, they initially promoted this train as a “higher-speed train”, a small but worthy concession to reality that quickly disappeared. To be fair to the sleek, neon-yellow train, it is unable to reach its advertised top speed and in fact seldom reaches even 100 Kph, faster than a freight train, but not by much.
Also unknown to the world, this American version of HSR has already (in two or three years since inauguration) had numerous derailments, scores of accidents, and around 100 deaths – several of which occurred during the test run, after which the train was cleared for service. Brightline, nevertheless, said “safety remains the company’s top priority”. Interestingly, the US Federal Railroad Administration data show significantly fewer deaths because (if you can believe this) they classify many of the deaths as “possible suicides”, and then impose “reporting restrictions intended to safeguard privacy”. (1)
According to one news report, Brightline trains had been performing test runs between Miami, Ft. Lauderdale and West Palm Beach since January 2017, a period during which several fatalities occurred. (2) Another news report stated that according to the Federal Railroad Administration this train has had “the most fatalities along the corridor in that time period”. (3) The situation is so bad that there are at least two Florida law firms now specialising in Brightline accident victim litigation. (4)
Also, according to the Federal Railroad Administration, “a Brightline locomotive derailed … at four miles per hour …”. The report continued that this was the second derailment within two months, the main cause being that this US high-speed train is using tracks and rail bed that were built more than 60 years ago and intended only for slow-moving freight trains. The company refused to confirm the accident for nearly six months, even in testimony to a Senate Committee, then called the derailment “minor”, and dismissed the critics’ concern as a “baseless fear tactic”. (5) Another article carried this smidgen of news: “fault of the tracks, new, still very rough, as if they would become better with use. Ten days later the stretch of track was straightened.” (sic)
These issues are noteworthy in several ways. First, on safety: Running “higher-speed” trains through level crossings (at ground level), is begging for fatalities. Running passenger trains on dilapidated trackage and rail beds that haven’t been maintained for 60 years, is the same. A second item is so illustrative of a pathological quirk that appears to exist only in the US. From Brightline’s home webpage:

“Hand-stitched leather seats. Sit 2 or 4 together at a table. Relax pre-departure in our first-class SELECT lounge with an ever-changing lineup of enticing bites and beverages. Lounge business services including iPads, a scanner & printer. Access to conference rooms in our stations (a $50/hr value). Complimentary onboard Wi-Fi.”

Hand-stitched leather seats and an ever-changing lineup of enticing bites on a train that derails at 4 miles per hour and has had scores of accidents and already killed about 100 people. This is the way Americans design their cars. Appearance is everything and substance is nothing. American auto designers hold frequent market tests where they introduce citizens to new automobiles, the purpose being to see if the new degradations in quality and safety can pass these public tests undetected. A so-called high-speed train running on dangerous tracks is glossed over for leather seats and Wi-Fi. Only in America. One internet commenter wrote, “This proves that Americans are too stupid for high-speed rail.”
This last item may contain research worthy of a Master’s thesis, this being a newspaper headline on one of the derailments: “Brightline accidents tragic, but is railway really to blame?” The article stated that this “innovative high-speed passenger rail service has been in operation for only about a week and a half, and already people have died”, then went on to say that most readers put the blame not on the railway but on “the decision-making of people”. There was an almost irresistible poignancy about this claim. In reading the reports, I could not shake the feeling of listening to a small child, disappointed at some failure but lacking the maturity to see reality as it was, and making an excuse typical of an 8 year-old mind. I believe we could argue this to be the consciousness level of the typical adult American.
*
Note to readers: please click the share buttons above or below. Forward this article to your email lists. Crosspost on your blog site, internet forums. etc.
Larry Romanoff is a retired management consultant and businessman. He has held senior executive positions in international consulting firms, and owned an international import-export business. He has been a visiting professor at Shanghai’s Fudan University, presenting case studies in international affairs to senior EMBA classes. Mr. Romanoff lives in Shanghai and is currently writing a series of ten books generally related to China and the West. he is a frequent contributor to Global Research. He can be contacted at: 2186604556@qq.com
Notes
(1) https://abcnews.go.com/Travel/wireStory/higher-speed-florida-train-highest-us-death-rate-67434427
(2) https://www.injuryattorneyfla.com/brightline-train-accident.html
(3) cs.trains.com/trn/f/111/t/267542.aspx?page=2
(4) https://www.tcpalm.com/story/news/local/shaping-our-future/all-aboard-florida/2018/06/21/brightline-fatality-29-year-old-man-who-stepped-front-train/721236002/
(5) https://floridapolitics.com/archives/247058-brightline-february-train-car-derailment-comes-light-critics-call-disturbing
(6) https://www.palmbeachpost.com/news/opinion/letters-brightline-accidents-tragic-but-railway-really-blame/9evqeaR6V9bXTiqiZEJ0lK/
Featured image is from news.cn.com; the rest are from the author
The original source of this article is Global Research
Copyright © Larry Romanoff, Global Research, 2019
By MICAS - April 25, 2020