Fake News and “The Naked Government”: Jessica Lynch and the US Invasion of Iraq

Fake News and “The Naked Government”: Jessica Lynch and the US Invasion of Iraq 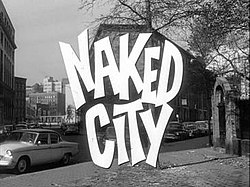 In the 1950s there was a TV series in the US titled ‘The Naked City’, composed from stories drawn from the lives of various residents. Each episode began with the words, “There are 8 million stories in the naked city. This is one of them.”
Today, in terms of fake news and fabricated events, we could direct a new TV series titled ‘The Naked Government’, each episode beginning with the words, “There have been 8 million news events faked and fabricated by the naked government. This is one of them.”
Jessica Lynch was a 19-year-old US Army clerk who served in Iraq during the 2003 US invasion. Her military vehicle was hit by a grenade, and crashed. Lynch was seriously injured, with a broken leg and hip, and some of her comrades were killed. But Jessica, being a typical American hero, crawled out of her vehicle while fighting the intense pain from her broken bones and, with one automatic weapon in each hand, she stood erect with both guns blazing, mowing down enemy soldier after enemy soldier, until all her ammunition was exhausted and she surrendered to unconsciousness from the pain. Jessica was shot multiple times, captured and repeatedly stabbed, then was taken prisoner and carried off with all her broken bones and bullet holes to a dirty Iraqi hospital where she was chained to a bed and held for eight days by vicious Iraqi guards who slapped and abused her and raped her.


A bit later, she was rescued by a group of very handsome and strong US Army Rangers and Navy Seals who shot up the entire hospital just to get her out. Her courageous rescue was recorded on live video, heavily promoted by the US military and State Department, and widely circulated by the US media as evidence of the incomparable courage, resourcefulness and strength of character of Americans.
Waiting until midnight, the Rangers and Seals stormed the hospital, their “daring assault” captured by the military’s night-vision camera, the entire rescue filmed by a video team that conveniently happened to be on the scene. “It was like a Hollywood film, an action movie with Jackie Chan. They cried, ‘Go, go, go’, with gunfire and explosions, jumping and shouting, breaking down doors.” Her rescuers had come under withering gunfire, but they survived because they were tough Americans, and they whisked Jessica to a helicopter and brought her to safety.
Newspaper headlines across America roared “Captured Jessica was fighting to the death”. US General Vincent Brooks breathlessly told the world, “Some brave souls put their lives on the line … they will never leave a fallen comrade”. President Bush announced that both he and America were “full of joy for Jessica Lynch”, her rescue presented as a testament to American values. Jessica “The Terminator” Lynch became an overnight American war-marketing hero, complete with Jessica fridge magnets, T-shirts, ashtrays and underpants. 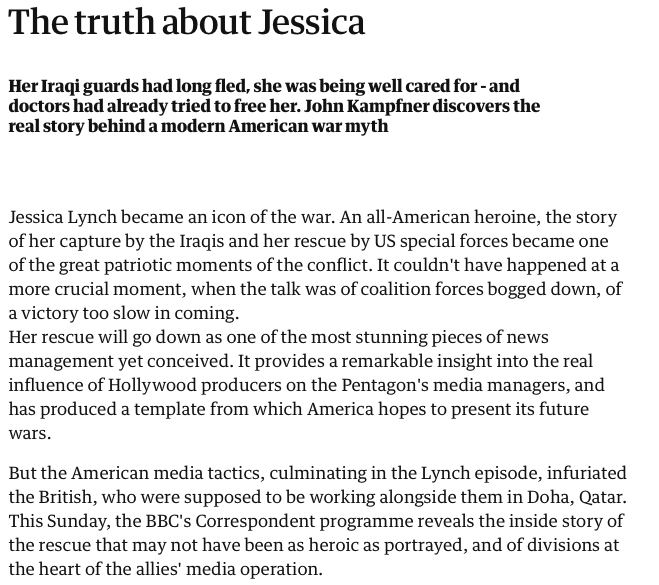 Scan The Guardian, May 15, 2003
Cute story, except that none of it happened.
Jessica Lynch was in an accident and did suffer a broken leg and hip, but no stab wounds, no bullet holes, no assault and no rape. In fact, she was rescued by the Iraqis, taken to a hospital and her road injuries were attended to. Jessica later testified to a Congressional Committee, “I am still confused as to why they chose to lie and tried to make me a legend”. She testified that she had never fired even one shot, that her M-16 (like all M-16s) had jammed anyway, that she passed out from the pain and awoke in a hospital where she was treated very nicely, with the nurses often singing to her to improve her spirits. (1)
A doctor at the hospital put Jessica into an ambulance and drove her to the American sector at serious risk to his own life but, when the ambulance approached, the Americans opened fire on it so it had to retreat. He then contacted the media to inform the Americans of Jessica’s location and condition, with a request to collect her.
In response, the Americans ordered the section of the hospital evacuated, and sent in their “Rambo” team and film crew to make yet another Disney wartime TV special.
The entire Jessica Lynch story was juvenile and faked. The Pentagon refused all requests for interviews with Jessica, claiming she had been so badly injured and traumatised that she had no memory of the event and probably never would have. Unfortunately for the Pentagon, Jessica did have her memory and chose to report – in public – to the US Congress, leaving the military caught in a huge lie yet once again.
*
Note to readers: please click the share buttons above or below. Forward this article to your email lists. Crosspost on your blog site, internet forums. etc.
Larry Romanoff is a retired management consultant and businessman. He has held senior executive positions in international consulting firms, and owned an international import-export business. He has been a visiting professor at Shanghai’s Fudan University, presenting case studies in international affairs to senior EMBA classes. Mr. Romanoff lives in Shanghai and is currently writing a series of ten books generally related to China and the West. He can be contacted at: 2186604556@qq.com. He is a frequent contributor to Global Research.
Note
(1) http://www.theguardian.com/world/2003/may/15/iraq.usa2
Featured image is from Wikimedia Commons
The original source of this article is Global Research
Copyright © Larry Romanoff, Global Research, 2020