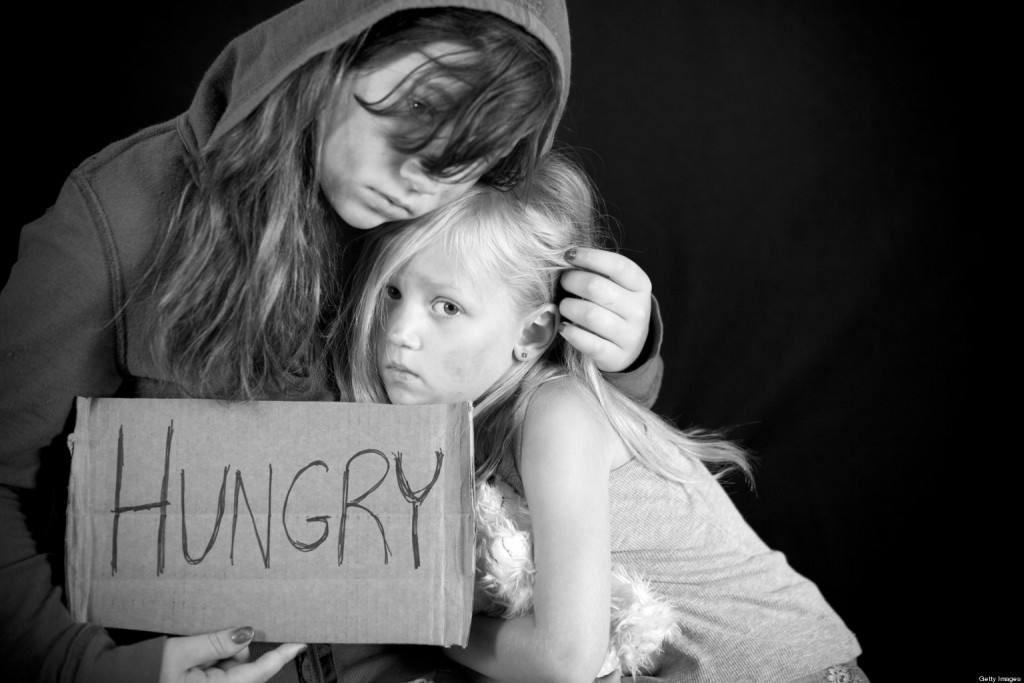 In July of 2013, Rose Aguilar wrote a wonderful article for al-Jazeera (1), in which she discussed the dire hunger crisis that envelops the US today. In her article, she brought back a memory of something I had long forgotten, an event that so outraged the American public that the government was temporarily forced to respond with more humane policies. That event was a 1968 CBS special hour-long documentary called Hunger in America, in which viewers literally watched a hospitalized child die of starvation. Nixon responded because the public outrage left him no choice, but Reagan quickly dismantled those improvements.
When Reagan came to power in 1980, there were 200 food banks in the US; today there are more than 40,000, all overwhelmed with demand and forced to ration their dispersals. Before 1980, one out of every 50 Americans was dependent on food stamps. Today, it is one out of four. Before Reagan, there were 10 million hungry Americans; today there are more than 50 million and increasing. A substantial part of the Great Transformation included not only tax cuts and other benefits for the wealthy, but a simultaneous massive reduction in budgets for social programs – in spite of the fact that Reagan and the secret government were creating the conditions that would desperately require those same social programs.

That 50 million hungry Americans today includes the 25% of all children in the US who go to sleep hungry every night. About 25% of the American population today cannot buy sufficient food to remain healthy, with most of these being hungry for at least three months during each year. It is so bad that many college students have resorted to what we call “dumpster-diving” – looking in garbage bins for edible food.
In 2013, America’s largest food bank in New York City delivered more than 35 million Kgs of food, and still 1.5 million of the city’s 8 million inhabitants are hungry. After that CBS documentary and prior to Reagan’s appearance, New York had almost no need for emergency food services, and had only 28 food agencies. Today that number is more than 1,000. The problem is so serious that many agencies fear that desperation for food will lead to increasing violence.
By contrast, only about 5% of Chinese said there had been times during the previous 12 months when they had been hungry, while in the US that number is now 25% and still rising. Maura Daly, a social agency spokesperson said,

“People have a lot of misimpressions about hunger in America. People think it’s associated with homelessness when, in fact, it is working families, it’s kids, it’s the disabled.”

Perhaps even more alarming was the release of study data in the middle of 2014 documenting that 25% of the US military members are also dependent on food stamps, food banks and other civilian welfare projects for their survival. After compiling four years of data, the nation’s leading domestic hunger-relief charity, released its largest and most comprehensive study which showed, among other things that 15% of all Americans rely on food banks for all their basic nutrition. In other words, no other source of food. But perhaps the most shocking revelation was that 25% of military personnel were in the same financial position. Of course, the Pentagon was quick to take issue with the study’s methodology, using statistical babble to cloak their embarrassment.
*
Larry Romanoff is a retired management consultant and businessman. He has held senior executive positions in international consulting firms, and owned an international import-export business. He has been a visiting professor at Shanghai’s Fudan University, presenting case studies in international affairs to senior EMBA classes. Mr. Romanoff lives in Shanghai and is currently writing a series of ten books generally related to China and the West. He can be contacted at: 2186604556@qq.com. He is a frequent contributor to Global Research.
Note
(1) https://www.aljazeera.com/indepth/opinion/2013/07/201371892231367525.html
The original source of this article is Global Research
Copyright © Larry Romanoff, Global Research, 2019