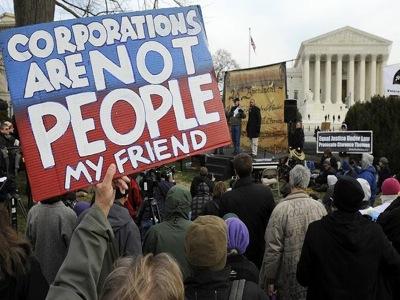 One of the arrows in the quiver of the attack on humanity from globalisation is a new field of study – the biology of corporations. Corporate apologists claim that the overwhelming majority of multi-national companies are amoral organizations in pursuit of pure profit, and will abide by ethical or legal codes only to the extent that this behavior will maximise their profit.
They take the view that multi-national companies can be described as – and function as – an amoeba or a virus, as non-sentient beings simply living their lives and multiplying as their Creator intended, following the law of their nature. Just as whales feed on plankton, corporations don’t steal from the poor and prey on the vulnerable because they are evil; they do it because they are “feeding”.
We are told that when a doctor studies the behavior of a virus, he doesn’t morally justify its killing humans, but he excuses its homicidal behavior because a virus simply acts according to its nature, human judgments of ethics or morality being misplaced.

The apologists lecture us that morality therefore isn’t a part of business, that any company will deceive, lie, cheat and price-gouge to the maximum extent possible, but that corporations shouldn’t be punished any more than should viruses. They claim it is the nature of a corporation to be a predator, to cheat, misrepresent and steal, so as to increase profits, that this is the natural order of things, and therefore no corporation has responsibility toward its victims.
Corollaries of this rich philosophical insight are that right and wrong are meaningless concepts in a corporation, that there is no such thing as corporate social responsibility, or in fact corporate responsibility in any sense. According to these people, it is just a law of nature that the strong prey on the weak, that there are no applicable morals or ethical standards in this natural order of the world, and that we cannot punish nature for taking its normal course. Corporations are simply unthinking, non-sentient brainless amoeba who react with instinct. They are not capable of acting, nor have they any responsibility to act, with high-mindedness or compassion or a sense of fair play and honesty.
In writing about the litany of abuses committed by US firms in China, they tell us the fault lies not with the American multi-national corporations but rather with Chinese consumers and Chinese society itself, who blindly revere foreign products and therefore deserve to be cheated. They tell us American companies have predatory pricing because Chinese consumers perceive their brands as premium products, and the Chinese will continue to be preyed upon by the MNC’s until they immunise themselves against this worship of the West. If the Chinese foolishly and innocently expect fair treatment, fair prices, and real product warranties like in the West, then they will just have to learn the way all fools learn – through pain.
India’s “Playing Hard to Get” with America by Letting the AIIB Fund China Pakistan Economic Corridor (CPEC)
Of course, this is classic ‘blame the victim’ theology. It was Iraq’s fault it was invaded and destroyed by the US, and Libya’s too. The fault lies not with America for loving wars, but with those nations for being too weak and unsuspecting, for not developing nukes sooner, for not being predators themselves. The capacity of the human heart for deceit, and of the mind for twisted and fraudulent thinking, is truly amazing. We have American multi-national corporations in China committing the most consistent and egregious acts of deceit and fraud, but are told it’s all our fault for our lack of cynicism, for thinking well of them and expecting them to behave in our country as they behave in their own.
But the argument is transparently false, American social Darwinism at its finest. A corporation is only a legal concept, a piece of paper in a lawyer’s office, but which is staffed by real people who make all its decisions and take all its actions. Even if the corporation were a virus, those who manage it, are not. The dishonest people who present these arguments ignore the main issue, which is that the management and staff or corporations are neither amoeba nor viruses, that these people are fully sentient and capable of choosing their actions. Our apologists choose to ignore free will and free choice, and pretend dishonesty is the nature of corporations and nothing can be done about it. To argue that a corporation is just an inanimate organism acting only on instinct, is a warped and willfully-blind presentation of reality, truly twisted thinking that defends the corporations and places responsibility for their fraudulent behavior on consumers or the government. It is not corporations that are fraudulent, but the people who run them.
In July of 2014, Peter J. Henning, a professor at Wayne State University Law School, wrote an article in the NYT titled The Difficulty in Holding Executives Accountable, in which he did a rather masterful job of promoting the myth of a corporate amoeba. He began by telling us,

“It is difficult to determine who is responsible for a corporate decision when authority is dispersed throughout an organization, which means that no one can be held personally accountable for violations.”

That says it all. Responsibility is so widely dispersed throughout a corporation that no live person actually has any legal or moral accountability for anything. All the blame is attributed to lower-level beings who somehow failed to communicate to officers and directors that the company’s (very profitable) products were killing the customers. Nothing more to see here. Let’s move on. Henning did note that GM “seems to have elevated the inability to hold senior officials accountable for corporate misdeeds to an art form”, but that seems to have been his only capitulation to reality.
He informed us that prosecuting managers is difficult because “criminal statutes usually require that the person take affirmative steps to violate the law, not just that something happened under their supervision.” So when Merck’s Vioxx was quietly killing perhaps 500,000 people in the US alone, the company’s executives didn’t actually ‘take affirmative steps to violate the law’; it was just that ‘something happened under their supervision’. When GM decided not to replace the ignition switch that was killing their customers, it was the same. “We didn’t kill the motorists; they just died while driving our cars”. Henning then tells us that GM is probably innocent because auto deaths arise “most often because of how (the car) was operated rather than how it was made”, presumably including the ignition turning itself off and simultaneously disabling the brakes and air bags.
He tells us that in America ignorance is a valid defense, even if the executive in charge was negligent. Finally, he comments on proposed new legislation that attempts to hold ‘people’ responsible by “increasing the risk of a criminal prosecution for not paying attention to the injuries or deaths (a product) might be causing”. But he then laments that this may never result in a prosecution “because employees may go overboard in reporting potential problems that could result in an information overload”. In other words, so many GM employees may be afraid of jail time that they actually report all the safety hazards in GM cars, and that the volume and number of these reports would so overwhelm the regulatory authorities that they would collapse, their resulting paralysis leaving them unable to prosecute anyone for anything.
It is true that we need regulations, but we have them because morals and ethics SHOULD BE a normal part of corporate life, and we therefore punish transgressions.
But that ignores the truth that corporate executives should not be criminals. We don’t need a country with a million anti-fraud laws and a billion cynical consumers. We need honest and socially-responsible corporations. THAT is where the problem originates. Cure that, and you cure everything.
Add new laws, and you will always be adding more laws because businessmen will always find new ways to cheat. Make consumers cynical, and they will never be cynical enough to protect themselves from everyone who wants to cheat them. But repair the moral deformities in the people managing the corporations, and you no longer need laws or cynicism. Everything will work the way it should.
We need governments to pass laws that provide for severe punishment of the individuals who violate those laws, and to execute that condemnation in far more serious terms than has occurred to date. Fining Wal-Mart, Merck, Coca-Cola, P&G and Apple a few billion dollars does nothing. We need a few public executions to have the desired effect.
*
Note to readers: please click the share buttons above or below. Forward this article to your email lists. Crosspost on your blog site, internet forums. etc.
Author Larry Romanoff is a frequent contributor to Global Research.
The original source of this article is Global Research
Copyright © Larry Romanoff, Global Research, 2019
By MICAS - April 25, 2020