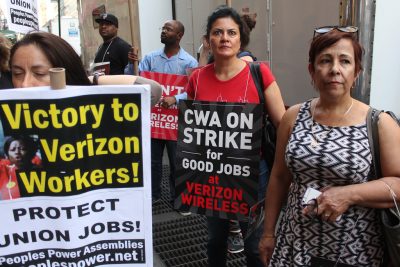 In contrast to most other industrialised nations, the US has never accepted the concept of labor unions, which were always denigrated in the media as a kind of dangerous socialism that would exploit workers. But it was always true that it was capitalism that exploited workers and socialism that attempted to protect them. Thanks to the media, most Americans today still have this understanding backwards from reality. Neither the US government nor its corporations have ever held workers or employees in much regard. There was a brief period after the Second World War during which enlightened corporate self-interest driven by fear produced a rather benign labor landscape, but that illusion was dispelled by the 1980s when the numbers of industrial private-sector workers with any kind of union fell by about 70%, largely through the harsh capitalist and legislative climate. The majority of American workers still wanted labor unions, but the anti-union conspiracy was too powerful.
The FBI infiltrated labor unions and installed corrupt officials in attempts to destroy them from the inside. When those attempts failed and labor organisers showed signs of being successful, they were either simply murdered or framed and convicted of crimes, and often executed. The US government has for all of its history acted with absolute disregard for the law, whenever the law became inconvenient to the purpose at hand. One of these purposes was the crushing of labor, where the government frequently not only fabricated criminal charges against union organisers but convicted them under laws that had never existed. In one famous case, labor organisers trying to create a mine workers union in Pennsylvania were charged by the state with murder and conspiracy. When these charges failed to hold, the organisers and about a dozen union members were hanged for “obstinacy”.


In February of 2015, Sam Mitriani wrote an informative article titled “The True History of the Origins of Police: Protecting and Serving the Masters of Society”, that reflected accurately the origins and applications of the American justice system. Here is a brief edited summary of his comments.

“This liberal way of viewing the problem rests on a misunderstanding of the origins of the police and what they were created to do. The police were not created to protect and serve the population. They were not created to stop crime, at least not as most people understand it. And they were certainly not created to promote justice. They were created to protect the new form of wage-labor capitalism that emerged in the mid- to late-19th century from the threat posed by that system’s offspring, the working class. Before the 19th century, there were no police forces that we would recognize as such anywhere in the world. Then, as Northern cities grew and filled with mostly immigrant wage workers who were physically and socially separated from the ruling class, the wealthy elite who ran the various municipal governments hired hundreds and then thousands of armed men to impose order on the new working-class neighborhoods.
Class conflict roiled late-19th century American cities like Chicago, which experienced major strikes and riots in 1867, 1877, 1886 and 1894. In each of these upheavals, the police attacked strikers with extreme violence. In the aftermath of these movements, the police increasingly presented themselves as a thin blue line protecting civilization, by which they meant the bourgeois elite portion of civilization, from the disorder of the working class. This ideology has been reproduced ever since, and is still the foundation of American law and justice today, which is one reason corporate executives are virtually immune from prosecution for even the most egregious of crimes while the lower classes will suffer five years in a prison for a minor theft or smoking marijuana.
There was a never a time when the big city police neutrally enforced “the law” – nor, for that matter, a time when the law itself was neutral. Throughout the 19th century in the North, the police mostly arrested people for the vaguely defined “crimes” of disorderly conduct and vagrancy, which meant that they could target anyone they saw as a threat to “order.” In the post-bellum South, they enforced white supremacy and largely arrested black people on trumped-up charges in order to feed them into convict labor systems. The violence the police carried out and their moral separation from those they patrolled were not the consequences of the brutality of individual officers, but of policies carefully designed to mold the police into a force that could use violence to deal with the social problems that accompanied the development of a wage-labor economy. The police were created to use violence to reconcile electoral democracy with industrial capitalism. Today, they are just one part of the “criminal justice” system that plays the same role. Their basic job is to enforce order among those with the most reason to resent the system.”

Mitriani told the story of the Auto Workers’ Walter Reuther, “whose socialist views were anathema to the owners of General Motors and other automakers”, and he was several times severely beaten and eventually killed. Once, during a time of heated labor negotiations Reuther was shot and seriously wounded in his home, that event followed by two more assassination attempts and the suspicious crash of a private plane in which he was travelling. Reuther survived those, but was finally killed in a second equally suspicious private plane crash, and the FBI still refuses to release the files on his death. Aside from the deliberate killings and frame-ups, the US government, unique among nations, has a long and sordid history of using its military to suppress and brutalise its own citizens whenever they came in conflict with the capitalists who have always controlled the Congress and White House. It has also accumulated a history of equally sordid legislation designed to protect and enhance the profits of its corporate elite at the expense of the people of the nation.
These attitudes toward the lower classes had been embedded in American capitalist and government DNA since the first days of the Republic. Prior to the late 1800s most people were either engaged in farming, owned a small shop or perhaps plied a trade like carpentry, blacksmithing or tailoring, the remainder eking a living from odd jobs and temporary employment. During this time a massive social change resulted from industrialisation, with large numbers of people migrating to the cities in search of employment, and therefore shifting from small farms or micro-businesses to being dependent full-time laborers. But it was true that for both capitalists and the government, these workers and their desire for livable wages were seen as enemies of progress. Workers were universally decrying their virtual wage slavery and lack of work safety while the government was equally universally and very callously employing the military to ensure the profits of capitalism. 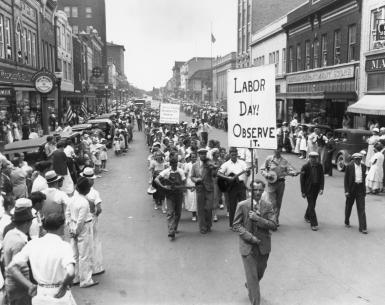 A 1934 Labor Day parade in Gastonia, North Carolina, composed of ten-thousand labor strikers.
From the late 1800s, the US military was one of the main tools of worker suppression. In Chicago in 1894 US troops put an end to a strike by railway workers, by opening fire and killing dozens of workers. Mining in the US was an extremely hazardous occupation and strikes by mine workers were common. In 1914, US troops opened fire on a group of striking mine workers in Colorado, again ending the strike by killing the strikers. A bit later, individuals trying to organise a labor union in a coal mine in Pennsylvania were shot and killed by the company management who were acquitted in a brief trial. Even the police were not immune; in 1919 a police strike in Boston was ended when the military was called in to violently end the strike, and many police officers were killed. In the same year, a labor organiser in Washington was captured, tortured, castrated and then lynched.
By the 1920s, US capitalists and the government had already developed nationwide plans to control workers and their wage demands, creating task forces to sabotage all union organisers and critics of capitalism and government. Many were imprisoned without charge and without access to legal counsel. The military on many occasions used bombers to attack striking workers. In one large miners’ strike in West Virginia in 1921, several thousand soldiers launched a massive shooting war with about 5,000 striking miners, then added a chemical warfare unit and both bombers and fighter aircraft. When the strikers surrendered, the survivors were charged with treason and imprisoned. In 1930, hundreds of farm workers were beaten and arrested in California for attempting to form unions, and convicted of “criminal socialism”. There are many dozens of examples spanning many decades, of the US military brutally and violently terminating labor strikes by killing the strikers.
The military weren’t immune, either. In 1932, as the Great Depression became severe, almost 50,000 veterans from World War I, marched to Washington to ask the government to pay the $625 bonuses they had been promised. The soldiers, most with their families, camped on some flat land near the Capital to raise sympathy for their plight, but sympathy was not forthcoming. Instead, then-President Hoover sent in the police, a move that resulted in brutality, violence, and quite a few deaths. When that failed, Hoover sent in the active military to disperse the ‘dissidents’. General Douglas MacArthur, then-Major Dwight Eisenhower, and George Patton, launched an assault on the encampment, flooding the camp with tear gas, then opening fire on their own veterans, injuring many thousands and killing many more, including the women and children.
Economic Upheaval and the Rise of the US Police State
It wasn’t only the US military that was engaged in these atrocities. Many large corporations formed permanent armies of their own to be used against striking workers, John Rockefeller being one of the worst, but by no means the only example. In 1927, his private army massacred all the striking workers at one of his mines in Colorado with machine guns. A few years later, more groups of striking textile workers were murdered in North Carolina. In the early 1930s, more than 500,000 mill workers went on strike in South Carolina, a strike so violently suppressed by both US military forces and private armies that no one dared try to form a union for another twenty years. In 1935, striking electrical workers at a plant in Toledo, Ohio were attacked and all killed by machine guns in the hands of thousands of US troops. At the same time, police in San Francisco shot and killed several hundred peaceful dock workers during a strike, the outrage provoking a widespread strike in the entire San Francisco-Oakland region. The media supported the outrage by claiming that “communist agitators had seized control of the city”.
One particularly infamous event known as the Ludlow Massacre, one of the most brutal attacks on workers in North American labor history, involved a strike by coal miners against Rockefeller’s inhumanity. The miners had been forced to work in extraordinarily harsh and dangerous conditions where fatality rates were very high and wages low. Further, they were paid with paper scrip which could be spent only in the company-owned store that carried very high prices. The mine workers succeeded in organising a labor union that then attempted to institute safety regulations and have increased wages paid in real money. A widespread general strike erupted when the mine managers killed a union organiser. Rockefeller responded by immediately evicting the miners from their company-owned houses, leaving them and their families homeless in a wilderness area in the middle of a harsh winter, beginning a seven month siege of the miners. 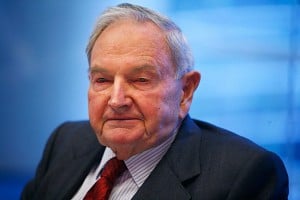