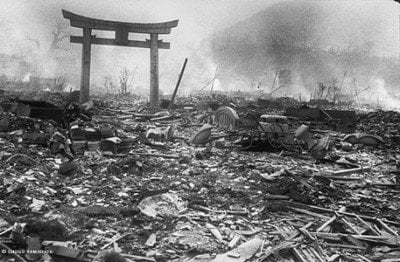 A couple of years ago an American writer named Greg Mitchell wrote an informative book on the huge cover-up orchestrated by the US government on the dropping of the first atomic bomb on Japan, and the censorship of the first Hollywood movie on the subject. (1) The government was in possession of much live film footage shot by the US military of both Hiroshima and Nagasaki that Mitchell says would have shocked viewers, with ghostlike ruins and babies with burned faces. He includes many of these original photos in his book, and details the extensive efforts to hide the facts and evidence of the use of the atomic bombs and the tapestry of lies created after the fact to justify this atrocity and present it as a necessary evil.
The Hollywood movie arose because the film industry wanted to warn the people of the world about the coming dangers of a nuclear arms race, Mitchell claiming the early scripts presented a shocking picture that would definitely have provoked disarmament, but the eventual Hollywood version of the official narrative was that the bomb was absolutely necessary to end the war and save American lives.

He writes that as the scripts were increasingly revised the bombing became not only justifiable but even admirable. Robert Oppenheimer, the prominent Jewish physicist primarily responsible for the development of the bomb, was assured that in the movie his character would display “humility” and “a love of mankind”. But that’s not quite how it was. “At the first successful detonation of an atomic bomb on July 16, 1945, “Oppenheimer was beside himself at the spectacle. He shrieked, “I am become Death, the Destroyer of worlds.” (2) 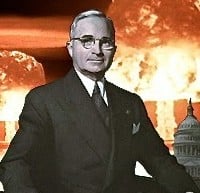 The movie script was further altered to show American president Truman agonising over the decision when in truth he proudly boasted that he never lost any sleep over it, and further wrote in a letter to a critic, “I have no qualms about it whatever”. (3)
Hollywood had begun the creation of yet another myth of American history. From Mitchell’s notes, even minor details in the movie were altered to make the bombing appear justified. Nuclear radiation fallout was dismissed as trivial, and fabricated scenes were inserted to depict the American bombers as being heavily bombarded with flak (untrue) to make the attack appear more courageous.
Claims were fabricated that the use of the atomic bombs would shorten the war by a year, which was 100% false since the Japanese had already repeatedly offered to surrender, as well as claims that use of the atomic bomb would save at least half a million American lives, also patently untrue. In fact, the bombings saved no American lives since it was already abundantly clear that no invasion of Japan would be necessary to effect a surrender, and in fact the prospect of a physical invasion was never even on the table. But the bombings did needlessly claim at least an additional nearly one million Japanese lives, even though Wikipedia states this at little over 100,000.
Another myth created by Hollywood was that the targets – Hiroshima and Nagasaki – had been chosen for their military value, but in truth both were entirely civilian cities and were chosen only because they hadn’t been bombed before and could clearly demonstrate the destructive power of this new weapon.
The final movie was presented as “basically a true story” to the countless Americans who saw it. The New York Times called it a “creditable re-enactment”, and praised its handling of the moral issues of a “necessary evil”. A popular news magazine praised its “aura of authenticity and special historical significance”. And the “humanitarian bombing” of Hiroshima entered American mythology as factual American history. But that’s not how it was. 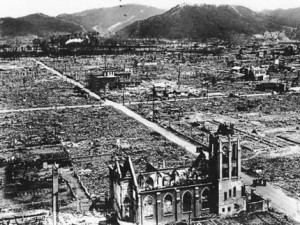 Ellsworth Torrey Carrington, in “Reflections of a Hiroshima Pilot” (4), quoted the second B-29 pilot as saying, “After the first bomb was dropped, the atom bomb command was very fearful that Japan might surrender before we could drop the second bomb, so our people worked around the clock, 24-hours-a-day to avoid such a misfortune.” One of the greatest lies fabricated for the movie was the story of US President Truman proclaiming that prior to the actual bombings the US would drop leaflets over Japan to warn the population of “what is coming” as a means to “save lives”. Harrison Brown, who had worked on the bomb, called this fiction of warning leaflets “the most horrible falsification of history”. Wikipedia, lying as always, tells us “Various sources give conflicting information about when the last leaflets were dropped on Hiroshima prior to the atomic bomb.” But in fact no leaflets were dropped on Hiroshima prior to the bombing on August 6.
Hiroshima and Nagasaki were not the original targets for the first atomic bombs. Maj. Gen. Leslie Groves is generally blamed for the suggestion to bomb Kyoto, but it appears well-documented that it was Bernard Baruch who persistently demanded Kyoto be destroyed because of its cultural and historical value to the Japanese people, its destruction opening a wound that would never heal. Henry Stimson, then US Secretary of War, refused to accept Kyoto as a target for that same reason, but was over-ruled. However, Kyoto was protected by Providence and a dense cloud cover that prevented the American bombers from locating it with sufficient accuracy, leaving them to proceed to their alternates.
In May of 1945, several months before the atomic bombs were ready, the self-named “Masters of the Universe” held a meeting at the Palace Hotel in San Francisco to discuss the ending of the war in the Pacific. The issue was that Japan was already suing for peace, and the collective opinion of these gentlemen was, according to Edward Stettinius, then Secretary of State, “We have already lost Germany. If Japan bows out, we will not have a live population on which to test the bomb … our entire postwar program depends on terrifying the world with the atomic bomb … we are hoping for a million tally in Japan. But if they surrender, we won’t have anything.” The advice of John Foster Dulles was “Then you have to keep them in the war until the bomb is ready. That is no problem. Unconditional surrender.” Stettinius replied, “They won’t agree to that. They are sworn to protect the Emperor.” Dulles’ response: “Exactly. Keep Japan in the war another three months, and we can use the bomb on their cities. We will end this war with the naked fear of all the peoples of the world, who will then bow to our will.” (5)
A great many Americans today are fond of justifying their nation’s use of nuclear weapons in Japan by telling us it shortened the war, fully confident their moral superiority remains intact. But in truth, the bombs were dropped on Hiroshima and Nagasaki mostly as a “once in a lifetime chance” to witness the effects of nuclear blasts on a human population. It is not widely known that the US dropped two different types of bombs – uranium and plutonium – onto the two cities, these bombings being live laboratory experiments to determine the differences in yield and effect between the two. The US Department of Energy still lists these explosions as “tests”.
After the bombings, there was an almost obscene eagerness on the part of the Americans to get to Hiroshima and Nagasaki to ‘examine and catalog’ the results of their new monstrosity. In reviewing the reports of the American presence in these two cities after the blasts, one cannot escape the conclusion that these so-called ‘scientists’ were almost as giddy as schoolboys in viewing their masterpiece of war, and too morally deformed to even consider the horror they had perpetrated.
Obama and the Bombing of Hiroshima
When American forces entered and occupied the two cities immediately after the bombings, their first order was a complete black-out of information and a ban on the publication of any reports of the destruction and its effects, maintaining a totally-controlled monopoly on information. Japanese journalists and cameramen were prohibited from any reporting, and threatened with court-martials and execution if they dared disobey. All books and written accounts of the bombings and their aftermath were censored and most often confiscated and destroyed by the Americans. Even the need to give treatment to the victims was forbidden to be reported in Japan, and consequently the Japanese had virtually no information of the conditions. All physicians in Japan were forbidden to communicate with each other or to exchange information on the human devastation. “Their records, clinical research and other data were suppressed and confiscated. The US military also confiscated all samples of damaged tissue, burned and irradiated skin, blood and internal organs, from both dead and living victims.” All information was totally suppressed.