Robert McNamara’s Infamous “Project 100,000” and the Vietnam War. A Premeditated Crime against Humanity 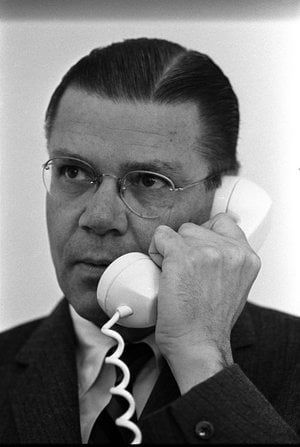 In the very long list of shocking and abominable atrocities committed by the US, there is one that stands out as especially obscene for the appalling and hypocritical inhumanity of US Government leaders. This was “Project 100,000”, a US military program enacted by then Secretary of Defense Robert McNamara to recruit 100,000 new soldiers per year during a time of great public opposition to the Vietnam war, and which was promoted as part of President Johnson’s ‘War on Poverty’. In McNamara’s own words, it was “a program to salvage the poverty-scarred youth of our society”, to give them two years of military service, then insert them into “a lifetime of productive activity in American civilian society”.
He further stated,
.
“Poverty in America pockmarks its victims inwardly. If unchecked and unreversed, that inner ghetto of the poverty-scarred personality of these men can fester into explosive frustrations of bitterness and violence. Chronic failures in school throughout their childhood, they are destined to a downward spiral of defeat and decay … If nothing were done to give them a strong sense of their own worth and potential, they, their wives and their children would almost inevitably be the unproductive recipients of some form of the dole ten years from now. Hundreds of thousands of men can be salvaged from the blight of poverty, and the Defense Department – with no detriment whatever to its primary role – is particularly well equipped to salvage them.” (1) (2)

.
That sounds good, except that this program was initiated during a time when the US was realising extremely high casualties in Vietnam, had already admitted the war was “unwinnable”, with most suitable recruits either taking student deferments or evading the draft by fleeing to Canada. McNamara’s solution was to run a sieve through the ghettos of America, an ingenious and diabolical solution to “rid the nation” of its surplus black and poor, in a program he may have hatched with the advice of Margaret Sanger, she of Planned Parenthood. In executing this program, McNamara lowered the standards to the point where these recruits were in the bottom quartile of intelligence and ability, a great many of them with an IQ of 60 or 65, and none above 80.
These new “soldiers” were functionally illiterate, able to read only at a Grade 3 level or lower. They were so severely (educationally) deficient that the military had to create little comic books to replace the training manuals, and many had to be taught even how to tie the laces on their boots. As other authors have noted, these men often failed their much-simplified basic training several times, with most being repeatedly “recycled” until they finally reached a deplorable minimum standard of readiness. None had the mental ability to appreciate what was happening to them.
The program ran for five years and recruited in total about 500,000 mentally retarded young men and gave them a one-way ticket to Vietnam, these helpless young men dying at many times the rate of regular soldiers. Many researchers have claimed that an overwhelming majority of these men, especially blacks, received combat assignments, and “comprised an overwhelming majority of … battle deaths”, and were also generally posted to “what were considered dangerous military occupations”. These men were provided with special ‘dog tags’ that began with “US67…” so they could be quickly identified by other soldiers. By all accounts, the regular troops did not want to be associated with these men, certainly not in a battle situation, believing their lack of intelligence and training simply jeopardised the lives of all around them. Many have reported that when battlefield decisions were being made, given that these men were unable to learn anything much more complicated than pulling a trigger, they were just sent to their deaths, “ending up on the Vietnam Memorial Wall at an alarming rate much higher than the average”. One young Vietnam veteran reported that a common order issued to these young men ‘salvaged from the blight of poverty’ was to “Go over there and see if there’s a sniper in that tree”.
US casualty figures mushroomed after the introduction of this program, the victims of which were simply cannon-fodder and, for this and other reasons, I remain convinced there is a high probability American deaths in Vietnam were grossly under-reported and that a great many of these nearly 500,000 simply never returned and whose records no longer exist. It is not only possible, but probable, that American deaths in Vietnam were in fact ten times the stated 50,000. Several organisations in the US have attempted to produce accurate Vietnam casualty statistics, but with little apparent success.
As one such organisation states,

“The Vietnam War presents multiple challenges to historians due to official discrepancies with draft numbers, contention over official number of soldiers deployed, and a general lack of transparency from the US government during the war leading to possible misinformation in historical records.”

In other words, the official sources of basic statistics as to the actual number of men recruited, the number sent to Vietnam and the number who died there, are often missing, sometimes contradictory, and sometimes wildly inaccurate, and the US military exercises only obstruction to those interested in remedying the situation. Moreover, without an Internet or mobile phones, and no social networking capability, the parents of these men would have no way of knowing the huge number of casualties from within their group.
On May 30, 2002, Salon Magazine published an article by Myra MacPherson on the HBO movie “Path to War” in which she discusses Hollywood’s attempt to “humanise” McNamara “while entirely overlooking … one of his most heinous acts” and ignoring his “arrogance and duplicity”. She notes that the HBO movie omits “some of the most shameful brainstorms of the Vietnam War’s masterminds – including a little-known recruitment program that turned the mentally and physically deficient into cannon fodder.”
She details how military recruiters “swept through urban ghettos and Southern rural back roads”, offering hundreds of thousands of the retarded poor – with IQs as low as the 60s – “a one-way ticket to Vietnam”, and that “McNamara’s Moron Corps, as they were pathetically nicknamed by other soldiers, entered combat in disproportionate numbers”, noting that they received combat assignments at 250% of the rate of general servicemen. MacPherson tells us that few today are aware of what she calls “this particularly shameful chapter” of American history, and that her stories of this episode were “generally met with disbelief”. This entire project had been so well buried by the government that almost no one was aware of its existence and few could believe it would be possible for the American government to perpetrate such an obvious genocidal travesty against its own population, especially after the military had already admitted the war “could not be won”.
In a 2006 article in the New York Times (3), this Project was dismissed as “a failed experiment” that was “of little benefit to the men it was created to help”, but my research leads me to conclude that, contrary to being a failed experiment, this program was a “success”, a truly ingenious and criminal method of applying eugenics to eliminate poverty (especially black poverty) and idiocy in America by using the mentally-deficient as cannon fodder in a trumped-up war, far from the first time a nation’s surplus poor discovered themselves in similar conditions. In recognition of his success, McNamara was rewarded by being given the post of President of the World Bank.
*
Note to readers: please click the share buttons above or below. Forward this article to your email lists. Crosspost on your blog site, internet forums. etc.
Notes