The Planned 1933 Fascist Coup in America

The Planned 1933 Fascist Coup in America

The secret US government and the European bankers have cherished this plan of an American fascist dictatorship for many decades, a plan that almost succeeded when a group of  American financiers (including George H. W. Bush’s father Prescott Bush) made their abortive attempt at a military coup in 1934. Few Americans, and even fewer others, are aware of this attempt since the media have totally censored the information. We have already read of US General Smedley Butler, a much-decorated war hero possessing great popularity among the people. (1) (2)
The small cabal of plotters offered Butler $3 million to assemble an army of 500,000 men, the salaries for whom would be paid by this same group of financiers, with an Arms company agreeing to supply the necessary weapons. Butler was to use this private corporate military to overthrow the Roosevelt government, after which the plotters would install a fascist dictatorship with Butler as the figurative head. Butler was told the financiers had $300 million on hand, and as much as $800 million if necessary to achieve their objective. This is in 1934 dollars, equivalent to nearly $20 billion in 2019. Unfortunately for the bankers, Butler was more loyal than greedy and informed Roosevelt of the plan. But Roosevelt had no power to arrest and prosecute for treason the members of this extremely powerful elite group, and could do no better than leak the news to the media. 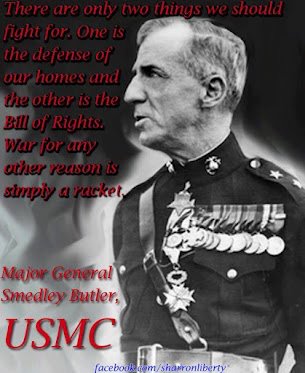 The US Congress conducted an immediate official investigation, the McCormack-Dickstein Committee, before which Butler testified as to the details of the entire plan, including the fact of himself fronting a government ruled by the bankers and their corporate allies. (3) (4) The Committee eventually confirmed as true everything Butler had told them, with Butler publicly begging the Committee to arrest and prosecute the DuPonts, Morgans and others, but Congress as well despaired of their ability to bring these powerful men to account. (5)
According to Richard Sanders:
This House committee was named after its chairman and vice chairman, John W. McCormack and Samuel Dickstein. It was called the Special Committee on Un-American Activities Authorized to Investigate Nazi Propaganda and Certain Other Propaganda Activities. In 1934, it held public and private hearings in six cities, questioned hundreds of witnesses and collected testimony filling 4,300 pages. Its mandate was to get “information on how foreign subversive propaganda entered the U.S. and the organizations that were spreading it.”
It did not do well in dealing with homegrown U.S. fascists, nor did it consider how Americans helped spread fascism abroad. It did investigate the fascist plot to seize the White House, but was criticized by John Spivak, Smedley Butler and others, for not revealing – let alone questioning – the powerful men behind the plot.
Although it spent more time tracking communist activities than it did fascist ones, its final report on Feb. 15, 1935, did substantiate the truth of the fascist plot. Despite its shortcomings, it was the only “un-American” committee to investigate fascism. It was quickly disbanded and replaced with another such committee that focused entirely on pursuing communists.  (Source: Press for Conversion! magazine, Issue # 53, “Facing the Corporate Roots of American Fascism,” March 2004)  Published by the Coalition to Oppose the Arms Trade.
In the end, Congress published a carefully sanitised report that confirmed the event but omitted the names of the plotters, and then suppressed the entire affair.
Excerpts below:

Special Committee on Un-American Activities Authorized to Investigate Nazi Propaganda and Certain Other Propaganda Activities (1934-35)
.
22.86 The Special Committee on Un-American Activities Authorized To Investigate Nazi Propaganda and Certain Other Propaganda Activities (73A-F30.1), forerunner of the Committee on Un-American Activities, was created pursuant to House Resolution 198, 73d Cong., adopted on March 20, 1934. The committee was established in reaction to the overthrow of a number of established foreign Governments in favor of communist or fascist systems and reflected concern that foreign propaganda might subvert the U.S. Constitution. Accordingly, the committee was established to ascertain information on how foreign subversive propaganda entered the U.S. and the organizations that were spreading it, as well as to suggest legislation to remedy the situation.
22.87 The committee was frequently referred to as the McCormack-Dickstein Committee in reference to its chairman and vice chairman, John W. McCormack of Massachusetts and Samuel Dickstein of New York. It conducted public and executive hearings intermittently between April 26 and December 29, 1934, in Washington, DC; New York; Chicago; Los Angeles; Newark; and Asheville, NC, examining hundreds of witnesses and accumulating more than 4,300 pages of testimony. The committee accumulated evidence regarding individuals and organizations who worked to establish in the United States policies followed by the Nazis in Germany, the Fascists in Italy, and the Communists in Russia. The committee gave particular attention to the organization and activities of Friends of New Germany and Silver Shirts of America. The committee submitted its report on February 15, 1935 (H. Rept. 153, 74th Cong., 1st sess., Serial 9890). National Archives (emphasis added)

The media ignored the story, except to openly ridicule Butler for attempting a hoax, then resolutely let the matter die.
In 1974 or 1975, the full report of Congress detailing Butler’s testimony and including the names of the plotters, was discovered and re-surfaced briefly in the public realm when a Congressional staffer found the Committee report and inadvertently published it. When discovered, it was quickly buried and firmly suppressed yet again, the media once more ignoring the story. It is possible that requests under the Freedom of Information act might succeed in obtaining these files. Wikipedia tells us that “While historians have questioned whether or not a coup was actually close to execution, most agree that some sort of “wild scheme” was contemplated and discussed.” Wikipedia specialises in this kind of historical revisionism – which is why most of Wikipedia is not only useless but dangerous but, on this topic the entire US mass media, book publishers, university professors, are all mute.
Unlike the Americans, The BBC performed a rather good investigation and produced a documentary program titled The White House Coup, which stated “The coup was aimed at toppling President Franklin D. Roosevelt with the help of half-a-million war veterans.” (6) 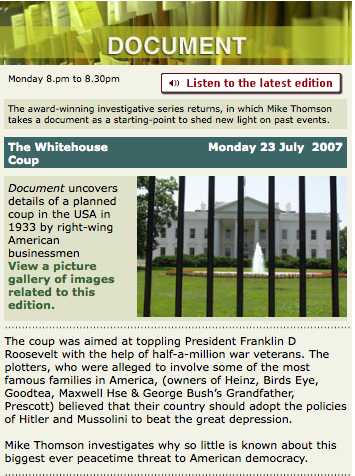 It further stated “The investigations mysteriously turned to vapor when it comes time to call them to testify”, and Butler himself reviled the US Congress for their cowardice, saying,

“Like most committees it has slaughtered the little and allowed the big to escape. The big shots weren’t even called to testify. They were all mentioned in the testimony. Why was all mention of these names suppressed from the testimony?”

In this stunning and unbelievable attempt to overthrow the government of the United States, Congress whitewashed this investigation as they did all others. The BBC further stated that

“FDR’s main interest was getting the New Deal passed, and so he struck a deal in which it was agreed that the plotters would walk free if Wall Street would back off of their opposition to the New Deal and let FDR do what he wanted”.

When does this sordid tale – along with the names and identification of the perpetrators and their hidden masters – enter American history books?
*
Larry Romanoff is a retired management consultant and businessman. He has held executive positions in international consulting firms, and owned an international import-export business. He lives in Shanghai and is currently writing a series of ten books generally related to China and the West. He can be contacted at: 2186604556@qq.com
Notes
(1) Major General Smedley Butler | Americans Who Tell The Truth
(2) War Is a Racket, by Gen. Smedley Butler; Wikipedia
(3) The McCormack-Dickstein Committee (1934-1935)
(4) The Plot to Overthrow FDR : Government Printing Office
(5) The Rothschilds and other European bankers are not mentioned by name in Butler’s writings, but it was clear from his Congressional testimony that the movement originated in Europe and, in the midst of the Great Depression in 1934, who else had that kind of money?
(6) BBC Radio 4 – Document, The White House Coup, 1933