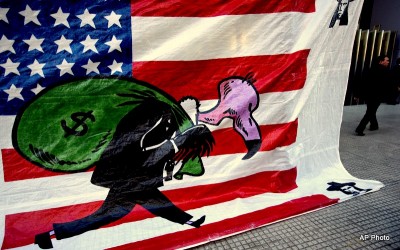 The US government and Western media enjoy accusing China of producing unreliable numbers, but it is widely recognised that there are no national economic statistics in the world as deliberately unreliable and misleading as those of the US. Yet one more feature of the Great Transformation was the US government’s innovativeness in fabricating statistics that raised economic misinformation to an art form.
Many researchers have published studies demonstrating that the official US economic statistics in nearly all areas are badly distorted to paint a positive picture widely divergent from reality.
As one commenter noted,

“The jobs numbers are fraudulent, the unemployment rate is deceptive, the inflation measures are understated, and the GDP growth rate is overstated. Americans live in a matrix of lies.”

With the compliant media controlling the narrative, few Americans have any idea of the true state of their economy or the personal consequences of these statistical manipulations.
GDP
You don’t have to be an economist to appreciate the difficulties in comparing national GDP rates nor the opportunities for deceit in their compilation.

“Like so much else about America, the nation’s wealth and high annual incomes are just another myth, and suddenly so much of the dissonant information we receive about the US begins to make sense – the documented stories of rampant poverty across the nation, middle-class households having to live on credit to maintain their deteriorating standard of living, deferred retirements, bankruptcies.”

Exactly correct. An increasingly small minority of the US population is indeed doing well, while an increasingly large majority is living in poverty and slums, are going bankrupt, cannot find a job, cannot afford to retire, are dependent for their daily survival on government handouts, and can no longer afford to go to the doctor. But the propaganda machine persists in promulgating a false image of a shining mansion on a hill.
Inflation Rate
One author noted that

“If inflation in America were calculated today by the same statistical methods used prior to the 1980s, the true rate would be almost 10% higher than that stated by the US government today.”

“If you perform a minimum of one hour of work in a week and are paid at least $20 … you’re not officially counted as unemployed. If you have a degree in chemistry or math and are working 10 hours part time because it is all you can find… the government doesn’t count you.”

To further emphasise the perilous state of the US economy and labor picture today, only 60% of employable workers in the US have jobs. According to the government’s own statistics, a full 40% of all working-age citizens have no employment, but officials still claim an unemployment rate of only 6%. To add to the labor catastrophe, it has been reported that the fastest-growing segment of the US workforce is those aged 65-75, people who should be retired but who cannot live on their meager pensions and unaffordable health care and must sacrifice their retirement years and return to the workforce in order to survive.
I suppose this commentary wouldn’t be complete without reference to China’s numbers, at least from the American point of view. For any country, but especially China, economic statistics are acceptable if the Americans like the numbers, otherwise they are “unreliable”, the accusation substituting as proof.
While Vietnam, Laos and Cambodia claim more than 5 million deaths during the Vietnam war, the Americans allow for only one million since “Vietnamese statistics are notoriously unreliable”. We have the same problem with China’s economic statistics: the Americans don’t like the numbers and so dismiss China’s statisticians as “untrained” and their statistics as “unreliable”, the accusations once again substituting as proof. Let’s note here that the US FED (and other notable economists) conducted their own analysis of China’s economic statistics and confirmed that the country’s actual growth was in line with the official numbers.
China’s statisticians produce their numbers for the Chinese, not for the Americans, so they don’t bother explaining their methodology and thus leaving the Americans in the dark, craving many juicy details of China’s economy that cannot be easily derived from the gross statistical numbers. And when the Americans call, nobody will respond to their questions so they accuse the Chinese of being “unreliable”, of fudging the numbers, of exaggerating, of maybe having “two sets of books” so the government can know “what is really going on” with the economy. According to Mark Magnier of the Wall Street Journal (where else?), a new set of good numbers “raised fresh doubt about the trustworthiness of China’s own statistics”, with Citibank helpfully chiming in with “Growth Likely Overstated”, and some unbiased Western ‘researchers’ claiming the numbers were inflated by nearly 100%. Again, accusations equivalent to proof.
But the real purpose of these attacks was illuminated by an economics professor at the Hong Kong University of Science and Technology, Carsten Holz, a man who even wrote a paper on “the quality” of China’s GDP statistics, who said Chinese statistics suffer from “an atrocious lack of transparency”. That statement would translate loosely as “We want to know more, but they won’t tell us because (1) they believe it is none of our damned business and (2) they think we will find ways to use their numbers against them.” Correct on both counts.
*
Note to readers: please click the share buttons above or below. Forward this article to your email lists. Crosspost on your blog site, internet forums. etc.
Larry Romanoff is a retired management consultant and businessman. He has held executive positions in international consulting firms, and owned an international import-export business. He lives in Shanghai and is currently writing a series of ten books generally related to China and the West. He can be contacted at: 2186604556@qq.com
Notes
(1) Mortimer Zuckerman: The Full-Time Scandal of Part-Time America
(2) U.S. Labor Market Reports: Someone Is Lying – SGT Report
(3) Glenn Kessler – The Washington Post
The original source of this article is Global Research
Copyright © Larry Romanoff, Global Research, 2019
By MICAS - April 25, 2020