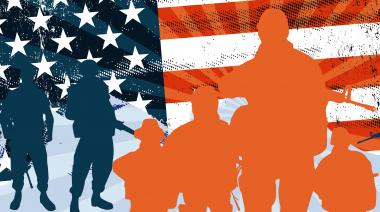 Preparing For Civil War?
US authorities have for decades become increasingly prepared for mass civil disturbances resulting from government and corporate attacks on American society. We can recall that in the early 1980s the Hidden State launched its open war on the middle class by the savage FED-induced recession and the unilateral revocation of the social contract that had existed since 1946. At that time, the US government had already anticipated widespread public unrest, fully expecting mass protests and riots, and had made preparations to deal with them in the form of internment camps. In a real sense, the government had prepared for another civil war.
Like most of the “Great Transformation”, it began during Reagan’s reign with what was called “Rex 84”, an abbreviation for Readiness Exercise 1984, a plan by the US government to detain large numbers of American citizens in case of civil unrest. This master plan involved the FBI, Department of Defense, the Emergency Measures group, the Secret Service, the CIA and altogether 34 government agencies. 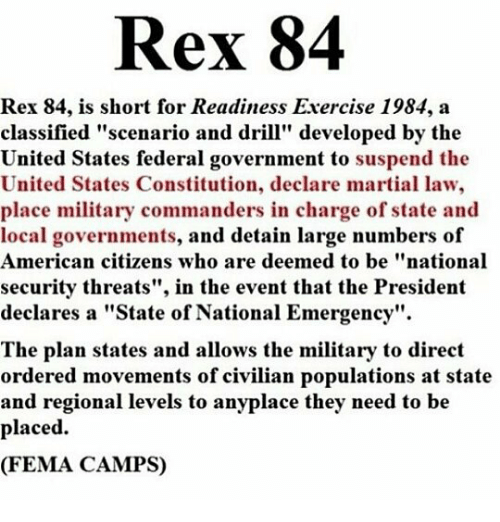 It was presented as an exercise to test military assistance in civil defense in times of national emergency, but in fact the plan was anticipating civil disturbances, major demonstrations and labor strikes that would affect continuity of government. The anticipated civil unrest from the FED-induced financial crisis that devastated the middle class was considered “subversive”, REX-84 being an authorisation for the US military to implement government-controlled movements of civilian populations at both state and regional levels, the arrest of many segments of the American population, and the imposition of martial law. (1) (2)

The Rex-84 program was created under the pretense of a possible mass exodus of illegal aliens attempting to cross into the US from Mexico, but when the program accidentally became public during the Iran-Contra Congressional hearings in 1987 it was revealed that it was in fact a secret federal government program
“to suspend the Constitution, declare martial law, assign military commanders to take over state and local governments, and detain large numbers of American citizens determined by the government to be ‘national security threats’.”
This was part of a master contingency plan for which the FBI today has a primary list of more than 100,000 Americans, and a secondary list ten times larger, who are targeted to be rounded up as subversives, including labor leaders, scholars and public figures, the incarceration designed to isolate political dissidents and to contain civil unrest.
And these are prison camps, ringed with fences, barbed wire and armed guards, not places from which escape would be likely, and they were designed to hold Americans, not Mexicans. (3)
There is no question the US government is prepared for the possibility of widespread and uncontrollable domestic disorder.  This program in place and building for years was encouraged by fears of a massive public uprising in the wake of the 2008 banking fraud. 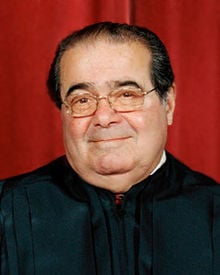 US Supreme Court Justice Antonin Scalia said some years ago that concentration camps were a likely future reality for Americans and that the Supreme Court would not do anything about the tyranny should the executive branch think it necessary. He mentioned the World War II internment of Japanese in the US and said of these camps,
“you are kidding yourself if you think the same thing will not happen again”. (4) (5)
In 2009, as the US financial crisis deepened and concern about public unrest was increasing, the US National Guard was posting job opportunities for “Internment/Resettlement Specialists” to work in “civilian internee camps” within the United States, and Halliburton [former] subsidiary KBR was seeking subcontractors to staff “emergency environment” camps located in five regions of the US. Earlier, in 2006, KBR was contracted by Homeland Security to build detention centers designed to deal with “the rapid development of unspecified “new programs” that would require large numbers of people to be interned.” (6) (7)
The US has for many years been dangerously close to a situation where, if the American people take to the streets in protest, these internments can be easily carried out. By 2004, there were more than 800 of these internment camps in the US, all empty, but all fully operational, staffed, and surrounded by full-time guards, ready to receive prisoners. I have seen photos. As well, many military bases are slated to be closed down and used as extra civilian prisons if the need arises, all intended for the internment of dissidents and others deemed “potentially harmful to the state”. Some camps can each hold 20,000 or more prisoners, a massive effort at civilian population control, and the program is still expanding. The US is very near the point today where political dissidents questioning the actions of their government will risk being rounded up and forced into these prison camps, essentially a government plan to forcibly suppress political dissent under the guise of rooting out domestic “terrorism”.
The US government defines many Americans as having become “pre-revolutionary” from their outrage at the 2008 government-approved housing collapse, with increasing concern that massive civil unrest would emerge from both the poverty-stricken lower classes and the eviscerated middle class, leading to what would become an internal civil war. This is the reason that the FBI and DHS increasingly focus their “anti-terror” apparatus on white middle-class Americans like the Occupy Wall Street protestors who were categorised as “low-level terrorists”.
In 2008, the Washington Post reported government plans to station many tens of thousands of troops inside the country for purposes referred to as “domestic security” in the light of massive civil unrest that would follow an economic collapse or serious financial crisis, perhaps stemming from 2008.
According to the government document,
“Widespread civil violence inside the United States would force the defense establishment to reorient priorities in extremis to defend basic domestic order and human security”,
stating that the military may be needed to quell “purposeful domestic resistance”. To prepare for this quelling of resistance, the US has resorted to demonising its own citizens, a recent study funded by DHS conveniently identifying those Americans who are “suspicious of centralized federal authority” and who exhibit signs of being “reverent of individual liberty”, and re-categorising them as “extreme right-wing” terrorists. (8) (9) (10)

The program is designed to “reduce and eliminate” all domestic resistance to the US government. “Crowd control agents” will be used for this purpose, and government agencies will be involved in “gathering information on dissidents” to identify all those who have either “threatened or are creating disturbances”. The US military produced a manual on what it termed “Civil Disturbance Operations” that outlines how military assets will be used to “help local and state authorities to restore and maintain law and order” in the event of mass riots and civil unrest. Military and other law-enforcement will be tasked with “breaking up unauthorized gatherings” and restoring order by
“presenting a show of force, establishing roadblocks, breaking up crowds, employing crowd control agents, and other operations as required”.
The same government manual describes how prisoners will be processed through these internment camps, and outlines how these internees would be “re-educated” while detained in prison camps inside their own country by their own government. A leaked military document titled ‘FM 3-39.40 Internment and Resettlement Operations’, outlined a program for “re-education camps” in the US which contained plans for “political activists” to be “pacified” by various psychological officers into “sympathising” with the government and into “developing an appreciation of US policies” while detained in prison camps inside the US. The document was restricted to Department of Defense personnel but was been leaked and posted online. It outlined policies for “processing detainees into internment camps” and made clear these operations would be used for domestic civilian situations. (11) (12) The full document is available here: (13)
“Once the detainees have been processed into the internment camp, the manual explains how they will be “indoctrinated”, with a particular focus on coercing political dissidents into expressing support for U.S. policies.”
Part of the stated role of the psychological officers would be to identify political activists, political leaders, ‘malcontents’, and other agitators, and to develop and execute appropriate
“indoctrination programs to reduce or remove antagonistic attitudes”.
However, their first task would be to “pacify and acclimate detainees to accept the internment facility’s authority and regulations”.
There are also disturbing insights into the government’s intention to use brutal force to violently quell any civil political unrest. The manual includes a long list of weapons meant to be used against protesting American civilians, including anti-riot grenades. Page 20 of the manual authorises the use of “deadly force” in confronting these peaceful political “dissidents”, the murderous intent made disturbingly clear with the directive that “Warning shots will not be fired” first. Northcom itself, in a September 8, 2008 Army Times article, said the first wave of the deployment, which was put in place on October 1st at Fort Stewart and at Peterson Air Force Base in Colorado Springs, would be aimed at tackling “civil unrest and crowd control”.
In November of 2013, Forbes Magazine ran an article based on the AP newswire, detailing that DHS had been assembling a massive weapons arsenal since 2011 or 2012. (14) The AP reported that Homeland Security had been stockpiling ammunition by buying more than 1.6 billion rounds of ammunition in addition to a prior purchase of 1.5 billion rounds, for a staggering total of more than three billion rounds. This is more ammunition than the US military used collectively in all its wars in the last decade, and represents about ten shots for every man, woman and child in America. There were also confirmed purchases by various government agencies, of hundreds of millions of hollow-point rounds to be delivered to dozens of locations around the US. These bullets are so lethal they are banned for battlefield use during wars because they mushroom and fragment on impact, their only purpose being to cause the maximum possible damage to internal organs. Also purchased were large numbers of magnum rounds with the power to penetrate walls, and a frightening hundreds of millions more rounds of specialty sniper ammunition.
Even more, it was reported in early 2015 that DHS had placed orders for massive amounts of other kinds of anti-civilian weaponry termed “Less Lethal Specialty Munitions”, which were described as “an arsenal of specialized weaponry for training and deployment against crowds”. These included flash grenades, light bursts, gas and chemical grenades, riot rounds, rubber bullets, and much more. These are all heavy-duty crowd control and civilian intimidation weapons. They have no other purpose and, in the volume in which they are being purchased, it is clear the US government is expecting some very serious civil disturbances, possibly a revolution, and soon.
As recently as 2018, Forbes was reporting more of the same, that these purchases have reached an astonishing ubiquity. It isn’t only Homeland Security who is arming to the teeth. Thousands of agents at the IRS now have tactical assault rifles and heavy weaponry. 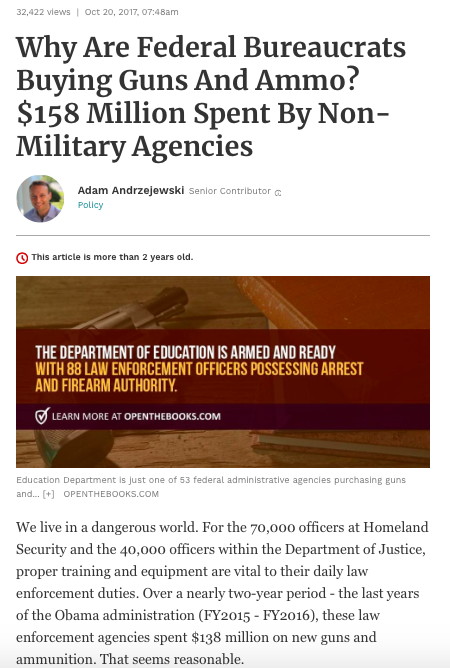