Nestlé and the World’s Water 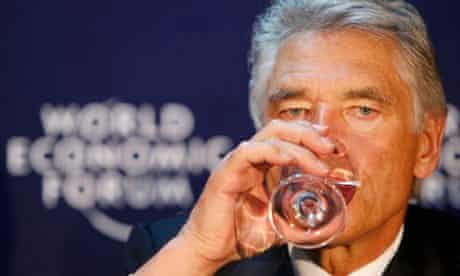 In 2013, the Internet almost exploded when a video was posted in which Nestlé Chairman and CEO Peter Brabeck-Letmathe said that “access to water is not a public right”, water was not a human right, that it was just another foodstuff and a commodity, that it should be “privatised”, given a “market value”, and distributed by the “free market”. Not only that, he stated that to declare water a ‘right’ or a ‘human right’ was “extreme”. (1) These are his exact words from the video:

“The one opinion, which I think is extreme, is represented by the NGOs who bang on about declaring water a public right. That means that as a human being you should have a right to water. That’s an extreme solution. And the other view says that water is a foodstuff like any other and like any other foodstuff it should have a market value.”

The Huffington Post wrote that “People were shocked at the inhumanity of Brabeck’s statement, and rightly so.” Nestlé’s water behavior is even more egregious than with the baby milk, though direct deaths are not recorded. But in fact, Nestlé have had enormous troubles in so many countries for depleting local water resources and leaving communities entirely dry, for the sake of bottling and selling their Pure Life brand water. Many cities and states in the US have had violent demonstrations against Nestlé for their draining of aquifers, especially in areas that are already suffering droughts. The company appears to be able to use political connections, and direct or indirect financing of the election campaigns of American politicians, to drain vast amounts of water for resale while the local population and farmers have either no water or suffer significant rationing.

A few years ago, the Miami-Dade county in Florida ran some ads claiming the county’s local tap water was “cheaper, purer and safer than bottled water”, with Nestlé immediately threatening to sue the local government for making those (undoubtedly true) statements. (2) And this is true all over the world. In one small community in Pakistan, a village councillor said small children were all being sickened by filthy water that resulted from Nestlé’s digging a deep well and draining the entire aquifer, with villagers needing to drill new wells many hundreds of feet deep to find any water at all. (3) Stories like this appear everywhere, with Nestlé executives brutal in their pursuance of water supplies to bottle for resale, in many cases draining much of an area’s available free water and then re-selling to the same local population the same water they obtained free prior to Nestlé’s arrival. (4)

When we look at the total picture collected from dozens of countries, and consider the statements by company executives, it becomes frighteningly apparent that Nestlé intend to obtain control of so many aquifers in so many locations that they will be able to dominate the supply of water to the populations of the world just as they dominate the distribution of baby milk. For these reasons and others, there is an enormous global movement developing against the entire bottled water industry for the damage it inflicts on the natural environment and the billions of plastic bottles that cannot be reused or recycled.

One media report stated that, according to Nestlé, “the price of a bottle of water is similar to that of other packaged beverages as it incurs similar costs linked to production, quality assurance, bottling, storage and distribution. One-third of the costs can be attributed to water and raw materials, one-third to production and one-third to distribution.” But a documentary titled “bottled life” demonstrated that in the US and many other locations, a truckload of water cost Nestlé only $10 but, after being bottled, was sold for $50,000. (3) The producers of the documentary apparently contacted Nestlé for an interview to present their side of the story, but the company declined, claiming the film would not represent them in a fair manner, which sounds suspiciously as if the facts in the documentary were true and the company had no defense.

In China, I have spoken to more than one former Nestlé employee who claimed the company was simply re-bottling and re-selling tap water, but in any case, Nestlé’s higher prices for bottled water appear to be based solely on the brand name, and my information coincides with that stated in the documentary above, which is that Nestlé obtains the water free or purchases it for an insignificant cost, then reaps a 10,000% profit on resale. But let’s be sure to register the main point which is that the executives of Nestlé not only believe water is a foodstuff that should have a price, but they plan – by effective expropriation – to ‘privatise’ that water by simply assuming ownership of it, then giving it a market value and distributing it through their own version of a free market. Citizens everywhere should be seriously alarmed by the enormous privatisation of drinking water reservoirs and their supply chains all over the world.

And, if I can entertain you with two bits of bizarre news, the first is that Canada’s University of Alberta, in spite of huge protests from the public and from its own faculty, gave an honorary Doctor of Laws degree to Nestlé’s Chairman and CEO for … Are you ready for this? The honorary degree was given for Brabeck’s great contribution to “the preservation, distribution and management of one of humanity’s most vital resources: water.” (5) (6) The second is that our problems are apparently not limited to baby milk and water. Yet another tragedy occurring in Africa has Coca-Cola’s name on it, the same Coca-Cola that plans to get into the milk business because “it will rain money”. Pediatricians in West Africa are reporting cases of a new medical condition so common it has a name: “Fanta Syndrome”, which is infant malnutrition and dehydration caused by babies drinking Coca-Cola’s Fanta orange soda rather than milk (because Nestlé’s powdered milk is so expensive), and probably containing the same pesticides as regular Coca-Cola. (7) (8)

Mr. Romanoff’s writing has been translated into 30 languages and his articles posted on more than 150 foreign-language news and politics websites in more than 30 countries, as well as more than 100 English language platforms. Larry Romanoff is a retired management consultant and businessman. He has held senior executive positions in international consulting firms, and owned an international import-export business. He has been a visiting professor at Shanghai’s Fudan University, presenting case studies in international affairs to senior EMBA classes. Mr. Romanoff lives in Shanghai and is currently writing a series of ten books generally related to China and the West. He is one of the contributing authors to Cynthia McKinney’s new anthology ‘When China Sneezes’.

His full archive can be seen at https://www.moonofshanghai.com/

(1) Nestlé Chairman Peter Brabeck Says We Don’t Have a Right to Water; https://www.huffpost.com/entry/nestle-chairman-peter-brabeck-water_b_315015

(4) Drinking Water Crisis in Pakistan and the Issue of Bottled Water; https://www.business-humanrights.org/en/pakistan-case-study-by-nils-rosemann-on-the-impact-of-nestl%C3%A9s-pure-life-water-business-on-the-right-to-water

(5) Nestle Chairman brings shame to the University of Alberta; www.babymilkaction.org/archives/10980